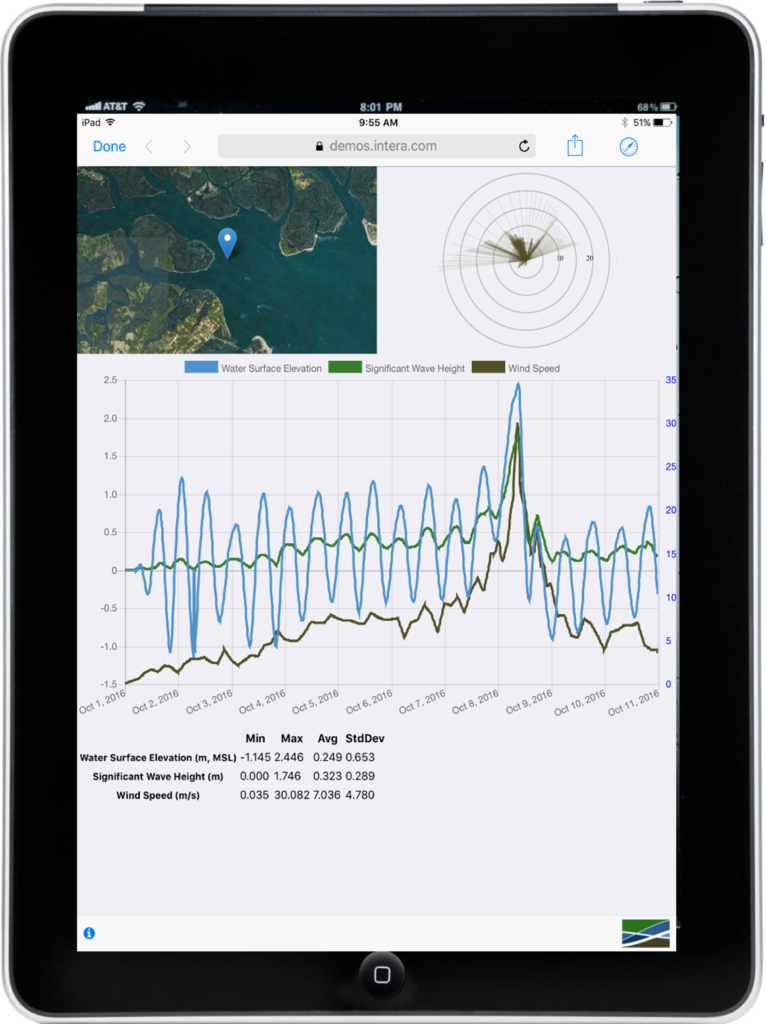 Property damage in the US from the 2017 Hurricane Season has been estimated at more than $200 billion. To support clients in determining the cause of hurricane damage, INTERA developed a web-based GIS application called “Hindcast 20/20” that provides a tool to evaluate impacts on a property located within a hurricane storm impact area. Hindcast models have been performed for most of the major storms to make landfall in the U.S. since 2005 (Ike, Katrina, Sandy, Matthew, and Harvey), and developed and calibrated for FL, TX, NJ, NY, GA, SC, MS, and NC with grid resolution as small as ten square feet. Model results are presented in GIS format and viewed as time series of water surface elevation (storm surge), wind speed, and wave heights. This allows clients to determine not only the magnitude of the conditions, but also the sequencing of events at any location within the study area. Clients access the data via a GIS interface and locate their area of interest using aerial photographs, street maps, coordinates, or addresses. The GIS is web-based and viewable on smart phones, tablets, or computers.

Hindcast employs the same methodology and models as the Federal Emergency Management Agency (FEMA) uses in their Flood Insurance Studies (FIS). Both storm surge and waves are generated by the wind and atmospheric pressure associated with hurricanes. As such, the primary inputs to the storm surge and wave models are the wind and pressure fields. For hindcasts, the wind and pressure fields are developed with the Planetary Boundary Layer (PBL) model. Results from the PBL model, wind speed and direction and the atmospheric pressure, are output at the nodes of two rectangular grids — the Western North Atlantic Tidal (WNAT) 28 km basin scale and the fine scale (three min) grid in the area of interest — at each time step during the approach and landfall of the storm. The wind and pressure fields provide the input to simulate surge and wave generation. Finite element surge (ADCIRC) and wave (SWAN) model meshes are developed from publicly available shorelines coverages, aerial photographs, and topographic and bathymetric survey data. Storms are simulated on multiple computing platforms, ranging from INTERA’s in-house 200-processor high performance computer system to the University of Florida Center for High Performance Computing’s 16,000+ processor system, to run model simulations in a parallel computing environment. As a result, simulation times are reduced to only a few days, significantly expediting results and project schedules. The web-based viewer presents maximum surge level, wind speed, flow velocity, and wave height results throughout the region of interest.

Working for a variety of clients (insurance companies, law firms, and state agencies), INTERA has hindcasted more than 300 hurricanes. After Hurricane Katrina hit the U.S. in 2005, causing an estimated $149 billion in damages, INTERA hindcasted the storm for a client in Mississippi. The primary goal was to assist the client in determining the cause of storm-related structural damage (caused by wind or water) in order to settle insurance claims. The hindcast model included the sequence of events in terms of wind speed, surge elevation, and wave heights to determine the validity of claims at individual properties.
To provide the results needed for this project, INTERA modified an existing FEMA mesh developed for other states to focus on the coast of Mississippi. The modified mesh consisted of more than 207,000 nodes and included spatially varying roughness, wind reduction factors, and surface canopy. Using our model, which was calibrated to FEMA standards with Hurricane Katrina high-water marks, INTERA provided the following results through a set of GIS coverages:

More recently, INTERA hindcasted Hurricane Michael, which hit the U.S. in 2018. The client hoped to provide forensic engineers with information to determine the cause of structure damage. To provide these data, INTERA modified an existing FEMA finite element mesh — for the entire Coastline of the Florida Panhandle — to focus on the affected areas. The mesh consisted of more than 898,000 nodes with approximately 95% located in the Panhandle of Florida and included spatially varying roughness, wind reduction factors, and surface canopy. The final mesh consisted of eight tidal gauges that recorded water surface elevations and six wave gauges that recorded wave height and time period during Hurricane Michael. INTERA provided the results to the client in GIS format, accessible through a web-based application. The GIS coverages present contours of peak wind speed, surge elevation, and wave height, and specific time series plots are available by tapping on specific locations.

For more information about Hindcast 20/20 or other coastal engineering services, contact INTERA at 512.425.2000 or email info@intera.com.