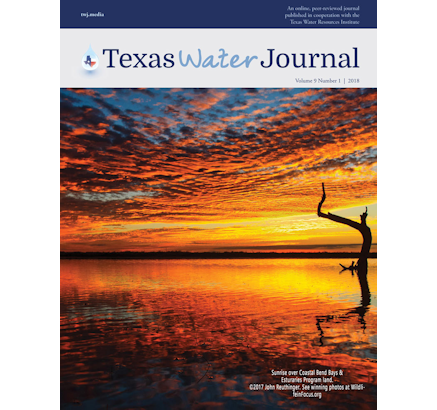 In Texas, surface water is owned and regulated by the State of Texas, whereas groundwater is owned by respective property owners under the rule of capture. Owners of surface water rights, issued by the state, and groundwater may use and sell their water as a private property right. The Texas Commission on Environmental Quality administers surface water rights, while groundwater conservation districts (where they exist) are primarily responsible for permitting groundwater use. This paper focuses on the complexity of both systems that are designed to manage water resources differently with specific emphasis on where surface water and groundwater interact. Surface water-groundwater interactions have contributed to disputes over the actual ownership and right to water. The available science and the limitations of the models currently used to make water availability and permitting determinations are discussed, as are the investments in field data gathering and interpretation and model enhancements that can lead to better assessments of surface water-groundwater interactions and impacts. More complete science and enhanced models may also help reduce the timeline associated with the permitting of future water supply and use strategies.

Traditionally, surface water and groundwater have been treated independently when managing these resources in Texas. However, it is well understood that these two resources are often hydrologically connected. In some instances, surface water serves as a source of flow that can change the chemistry and availability of groundwater. Conversely, groundwater can increase the flow volume and affect the chemistry of surface water. In some cases, the same stretch of river may lose flow to the aquifer in one season and gain flow from the aquifer in another season. As the demand for water and the need for new water supplies increase in Texas, understanding the hydrologic connection between surface water and groundwater becomes integral to developing appropriate legislation and strategies to effectively use and manage these two resources.

A stream that receives water emerging from a submerged spring or other groundwater seepage through its streambed is a gaining stream (Winter et al. 1998). A stream that loses water to groundwater by outflow through the steambed is called a losing stream (Winter et al. 1998). Figure 1 illustrates the dynamics of gaining and losing streams. A stream may always gain water from an aquifer (perennial streams) or always lose water to an aquifer (intermittent or ephemeral streams). The flow conditions in a stream might also vary over time and across space, such that it is characterized as both gaining and losing. The conditions that cause these variances can be natural, such as flood events, or anthropogenic, such as pumping.

An important metric for evaluating SW-GW interactions is the difference in elevation between the water table in an aquifer and the water level in a stream. For a gaining stream, the water-level elevation in the stream is lower than the water level in the immediate aquifer. Under these conditions, the aquifer discharges water to the stream, increasing the stream's flow. For a losing stream, the water-level elevation in the stream is higher than the water-table elevation in the aquifer. Under these conditions, the stream recharges water to the aquifer.
Groundwater contribution to a stream can originate from unconfined aquifers or from confined aquifers. For the case of an unconfined aquifer, groundwater flow typically exits an aquifer and flows to the stream as diffuse flow. In coastal aquifers such as the Gulf Coast Aquifer System, the majority of groundwater contribution to streams occurs as diffuse flow. For the case of a confined aquifer, pressured groundwater flows through preferential flow pathways created by faults, fractures, and karstic features until it exits at a spring location and enters a stream. In the Texas Hill County, the confined section of the Edwards Aquifer produces some of the biggest springs in Texas. These springs include Barton Springs, San Marcos Springs, Comal Springs, Las Moras Springs, and San Felipe Springs. The Texas Water Development Board (TWDB) (2016a)made several key points regarding SW-GW interactions in Texas:
• An estimated 9.3 million acre-feet of groundwater flows
from major and minor aquifers to surface water in an average year. This represents about 30% of the average surface water flow in Texas.
• Aquifer interactions with surface water vary regionally and within each aquifer. Between 14% and 72% of streamflow over aquifer outcrop areas is due to groundwater discharge from major and minor aquifers.
• The largest groundwater contributions to surface water occur in East Texas, the Hill Country, and around major springs in West Texas.
• The aquifer with the most groundwater discharge to surface water is the Gulf Coast Aquifer, with an estimated 3.8 million acre-feet per year.
Besides indicating that SW-GW interactions can significantly affect streamflow, the TWD B (2016a) shows that local geology and meteorological conditions are important factors that affect SW-GW interactions.